Have you ever been called to a peculiar obedience? To something that just doesn’t make earthly sense, but you had little doubt it was something God wanted?

Now the gates of Jericho were securely barred because of the Israelites.
No one went out and no one came in.
Then the LORD said to Joshua,
“See, I have delivered Jericho into your hands,
along with its king and its fighting men….”
Joshua 6:1-2

I am not a part of any of the armed services. Never have been. But it seems to me that looking at Jericho “securely barred” would hardly be the time for the Lord to say, “See? I have delivered Jericho into your hands…” If I were Joshua or any of the Israelites at that moment, I would have said, “No, honestly, Lord, I don’t ‘see.'” 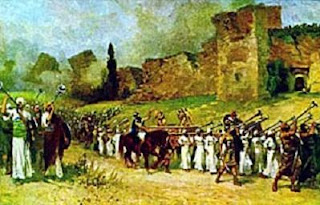 But have you ever been in a situation where you sensed that the Lord wanted you to believe him for a great victory? Where you knew in your heart–perhaps through a promise in the Scriptures or a godly friend’s encouragement or the testimony of the Spirit within–that God is up to something? The reality of that wonderful “something” wasn’t evident outwardly or visibly, but you had a confidence because at some level God had said “See? I have done it…”

What is it for you right now? Maybe it is that you will overcome some physical concerns–maybe this relates to your size for you. Or maybe you have an eating disorder and you KNOW that you will one day walk in freedom from it. Prayerfully consider what God is telling you is already done in His power.

I think I know what it is for me, but can I just be honest with you? A part of me is afraid to believe God because…well…what if I am wrong? What if it doesn’t happen and I have believed that He was going to do it? I get concerned that my faith can’t take a hit like that…so I end up refusing to believe God for the “really big” things. That preserves stunted faith. :-/

I wonder what would have happened if, instead of believing God and leading the Israelites to do likewise, Joshua had “covered for God.” What if Joshua hadn’t believed God when he said, “See? I have…” What if he had challenged God and said, “Nope. I don’t see. Show us….”

Instead of the usual and perfectly predictable “frontal assault,” God called the Israelites to do some pretty strange things:

“March around the city once with all the armed men.
Do this for six days.
Have seven priests carry trumpets of rams’ horns in front of the ark.
On the seventh day, march around the city seven times,
with the priests blowing the trumpets.
When you hear them sound a long blast on the trumpets,
have the whole army give a loud shout;
then the wall of the city will collapse
and the army will go up, everyone straight in.”
– Joshua 6: 3-5

What is up with that? Why the delay? Why the funky march each day for six days when God could have spoken the walls into dust? Why a shout and trumpets and all? I can just imagine being an Israelite warrior wondering, “And is that when I get to use my sword?” 🙂 Not this time. God called the warriors to leave their swords in their sheaths. Interesting…The walls were going to fall without them!

I am struggling with this a lot. There are walls between me and a loved one and between a loved one and God. In fact, a couple of loved ones. I really really want to believe God that he has won the victory and it is just a matter of time before I actually see it. Right now, though, he is calling me to a peculiar obedience, all right. He is calling me…of ALL things…to SHUT UP.

There is no nice way of putting this.

I am a woman of many words.

Words when I am joyful.

Words when I am sad.

Words when I am worried.

Words when I am thrilled.

The list goes on and on. In fact, someone I know and love and trust–a godly counselor–has exhorted me that I have trusted in my words as a functional messiah. YIKES! I think he has been right in many ways.

So, for now, I am supposed to do a silent march around “Jericho.” I don’t even get to blow the trumpet! 🙂

God wants me to be quiet…and wait…and to believe HIM (not in my words or in my ability to persuade). I call this a peculiar obedience because I am just sure God could *use* my help! 🙂 I mean, when the fighting men were told they didn’t get to use a sword, arrow or spear to bring the walls down, I wonder if they chafed a bit at the thought. What did they think about marching without using their weapons…the weapons that they were just positive were useful in a situation such as the very one in which they found themselves?

Well, you know the story.

When the trumpets sounded, the army shouted,
and at the sound of the trumpet, when the men gave a loud shout,
the wall collapsed; so everyone charged straight in,
and they took the city.
– Joshua 6:20
I wonder what the people of Israel thought about during those six days while they marched without seeing any obvious evidence that the city was going to be theirs? I wonder what they learned? Would the lessons have been learned if it had been 2 days instead of 6?
God is asking me if I will keep marching and keep focusing my eyes on what HE will do. The temptation is great for me to do what I have always trusted in…but this time I want to remain resolute to keep on marching–silently–trusting that God has given the city. It is a matter of time before I see it. HIS time–not mine.
How about you? Will you believe what God has said–that the walls will fall? Will you keep on marching and choose not to depend on what makes “sense,” but trust, instead, that following through on a peculiar obedience really will be used of God for the deliverance HE has promised? 🙂